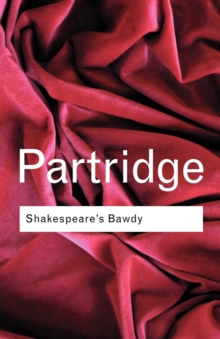 Shakespeare's Bawdy must rank as one of the great Eric Partridge's most outstanding accomplishments.

In it Partridge, regarded by Anthony Burgess as 'a human lexicographer, like Samuel Johnson', was able to combine his detailed knowledge of Shakespeare with his unrivalled knowledge of Elizabethan slang and innuendo.

It is, as he describes it, 'a literary and psychological essay and a comprehensive glossary', which opened the window upon a long-avoided aspect of Shakespeare's plays.

Shakespeare's Bawdy is a work of delight and insight that has an appeal that transcends time and class.

Acclaimed by Stanley Wells, editor of The Oxford Shakespeare , as 'a classic of Shakespeare scholarship', it takes its place alongside other classics with a well-deserved, if slightly cheeky, impunity.

For sheer reading pleasure, Shakespeare's Bawdy is a wonderful addition to any bookshelf.