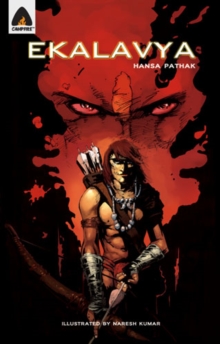 The offering : the story of Dronacharya and Ekalavya

By: Pathak, Hansa,  Kumar, Naresh(Illustrated by)

Part of the Mythology series

The Mahabharat is an abiding collection of stories about the ancient Pandav-Kaurav feud over the Kuru throne.

Traditionally, the Pandavs are accepted as the good side but there is one story that drops an ungraceful shadow on that notion - and that is the story of Ekalavya.

Ekalavya, whose skill with archery could have rescued the Kauravs from defeat.

Ekalavya, who gave away his most important asset as guru dakshina so that the guru-shishya parampara is not let down.

Ekalavya enters the Mahabharat years before Kurukshetra, when the Pandavs were still learning warfare under Dronacharya.

The story begins simply - the tribal Prince seeks the tutelage of Guru Dronacharya, only to incite the jealously of Arjun - but ends terribly.

Narad, the great Rishi, who despises lies but loves trouble, is determined to make this story of Ekalavya live on. And it is on the battlefield of Kurukshetra, where the rectification of injustice was sought at all costs, that he chooses to retell the tale.