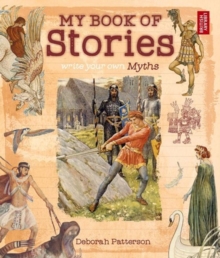 My Book of Stories : Write Your Own Myths

My Book of Stories: Write Your Own Myths is a compendium of story starters taken from some of the very best stories ever told.

Explosive creation myths, tales of gods at war and awesome acts of bravery by mythical heroes will inspire new characters to be created, new plots to be written, and perhaps even a mythical comic strip to unfold.

Within the colourful and beautifully illustrated pages of this book are opportunities to write tales of family feuds among the gods, to invent new myths about how the universe was created, and to take a trip into the underworld.

Budding authors will have stories to write, journal entries to fill in and pictures of new characters to draw, all inspired by some of the best-loved myths from around the world, featuring not only the familiar tales of the Norse, Greek and Roman gods, but also the less well-known stories which have their origins in Central America, Australasia and the Far East.

My Book of Stories will also be packed full of fun titbits of information about mythical characters, storytelling top tips and puzzles