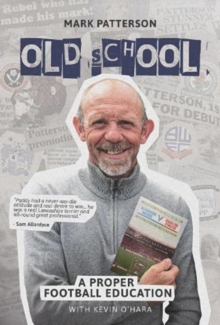 Mark Patterson played almost 500 league games in an 18-year career and, as documented in his funny, down-to-earth and thought-provoking autobiography Old School, his time as a professional footballer straddled two eras.

At 18, he played for his hometown team Blackburn Rovers against Kevin Keegan and Newcastle United at a century-old St James' Park.

He later battled with Paul Gascoigne at Middlesbrough's shiny new Riverside Stadium, a month before Gazza was sensationally omitted from England's World Cup squad. He played in dilapidated stadiums, with and against proper 'old school' footballers, and later had a taste of the promised land of the 'new school' after helping Bolton Wanderers rise from the third tier and into the Premiership. Patterson played for some of English football's proudest football clubs, including Blackburn, Preston North End, Bolton and Sheffield United, and had two spells at now-defunct Bury.

As his career fizzled out, so did his bank balance and marriage.

Divorce and bankruptcy followed. But his old school spirit got him through...