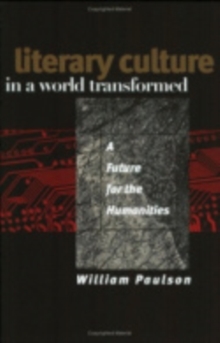 Literary culture in a world transformed : a future for the humanities

Literary studies are in danger of being left behind in the twenty-first century.

Print culture risks becoming a thing of the past in the multimedia age; meanwhile, human life and society are undergoing rapid changes as a result of new technologies, the intensification of global capitalism, and the effects of human actions on the environment.In this transformed world, William Paulson argues for a radical renewal of literary studies.

Modern literary culture has defined itself, in opposition to science, politics, and commerce, as a protected sphere of democratic and free inquiry, but today that autonomy may lead to isolation from the real dynamics of cultural and global change.

Paulson clearly and convincingly demonstrates the need for literary studies to embrace both the unfashionable literary past and the technologically saturated future, and to train not a countersociety of cultural critics but citizens of the world who can communicate the irreducible strangeness and multiplicity of literature to a society on hyperdrive.

His series of concrete proposals, ranging from a closer connection between literature and everyday language to the restructuring of undergraduate and graduate education, will immeasurably enrich current discussions of the humanities' role in the life of the world.