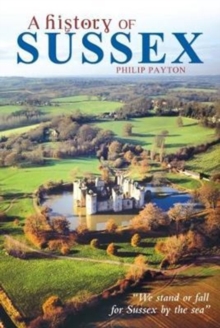 A history of Sussex

Philip Payton's history of the great county of Sussex is a masterly piece of work.

Combining sound academic research with a genuine talent for writing, this superb new book tells the story of Sussex from ancient times to the present day, exploring some very interesting themes along the way. "In writing this book I have been struck by just how much Sussex history is `invasion' and fear of invasion.

From those early hunter-gatherers to twenty-fi rstcentury migrants, such `invasions' have often been enriching.

But there have also been invasions on the grand scale, bringing death and destruction and sometimes wholesale upheavals in governance, religion and culture.

Which brings us to another strong theme: violence. Civil confl ict, again detectable from earliest times, has been a regular feature of Sussex life, and the Civil War itself had a particular and vivid Sussex dimension.

Most astonishing of all, perhaps, is the violence endemic in the Sussex countryside in the eighteenth and nineteenth centuries - encompassing smuggling, mutinies, riots, and protests - an aspect of the county's past that has almost disappeared from popular memory."