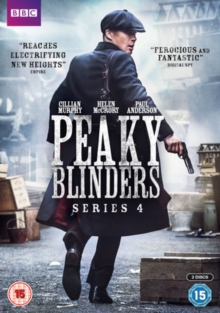 The complete fourth series of the BBC crime drama following the lives of a gangland family living in Birmingham in the 1920s.

Named after their practise of sewing razor blades into the peaks of their caps, the notorious 'Peaky Blinders' gang is one of the city's most feared, with interests in illegal betting, protection and the black market.

Former war hero and brains behind the operation Tommy Shelby (Cillian Murphy), however, is eager to safeguard his family's success by making the business legitimate and is keen to expand the empire.

In this series, beginning in 1925, the Shelby family receive letters from Luca Changretta (Adrien Brody), a feared member of the Sicilian Mafia who has just been released from prison, vowing vengeance against them.

The threat causes the Shelby family to put their differences aside and unite in order to save themselves, but will the shaky alliance hold and prevail?