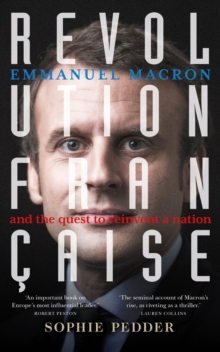 Revolution Franðcaise : Emmanuel Macron and the quest to reinvent a nation

Now updated with new material including interviews with Emmanuel MacronTwo years after Emmanuel Macron came from nowhere to seize the French presidency, Sophie Pedder, The Economist's Paris bureau chief, tells the story of his remarkable rise and time in office so far.

In this updated edition, published with a new foreword, Pedder revisits her analysis of Macron's troubles and triumphs in the light of the gilets jaunes protests.

Eighteen months after he led his own audacious insurgency against France's established parties Macron would face another popular insurrection.

This time, he was the target. In her vivid account, Pedder analyses the first real political crisis of Macron's tenure, how the movement emerged on roundabouts and in cyberspace, its impact on his plans to transform France, and the repercussions for representative democracy.

On the eve of important European elections, and with nationalist and populist forces rising across the continent, she considers whether Macron can still hope to hold the centre ground, work with Germany to rebuild post-Brexit Europe, and defend the multilateral liberal order. Meticulously researched, enriched by interviews with the French president, and written in Pedder's gripping and immensely readable style, this is the essential, authoritative account for anyone wishing to understand Macron and the future of France in the world.