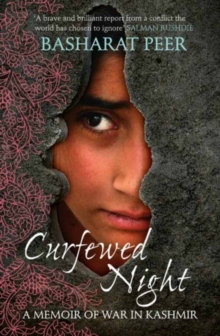 Curfewed night : a memoir of war in Kashmir

Longlisted for the Guardian First Book Award and Winner of the Crossword Prize for Non-fiction '"Curfewed Night" is a passionate and important book - a brave and brilliant report from a conflict the world has chosen to ignore.' Salman Rushdie Basharat Peer was a teenager when the separatist movement exploded in Kashmir in 1989.

Over the following years countless young men, fuelled by feelings of injustice, crossed over the 'Line of Control' to train in Pakistani army camps.

Peer was sent off to boarding school in Aligarh to keep out of trouble.

He finished college and became a journalist in Delhi.

But Kashmir - angrier, more violent, more hopeless - was never far away. In 2003 Peer, now a young journalist, left his job and returned to his homeland.

Drawing a harrowing portrait of Kashmir and her people - a mother forced to watch her son hold an exploding bomb, politicians living in refurbished torture chambers, picturesque villages riddled with landmines - this is above all, a story of what it really means to return home - and the discovery that there may not be any redemption in it. Lyrical, spare, gut-wrenching and intimate, Curfewed Night is a powerful and intensely moving debut, combining the insight of a journalist with the prose of a poet.