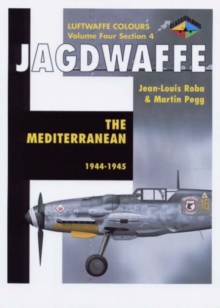 Part of the Jagdwaffe S. series

After clearing North Africa of Axis forces, the Allied planned to attack via Sicily and Italy.

But after their success in invading Sicily. Allied commanders found that what was thought to be the 'soft underbelly of Europe' turned out to be a 'tough old gut' as German forces conducted a brilliant defence in Italy.

This was a difficult time for German fighter pilots for while their airfields were bombed and they were outnumbered in the air, their leaders - somewhat detached from reality - were convinced that a decisive defeat could still be inflicted on the Allies.

Morale declined amid blame and recrimination, and pilots were threatened with court-manial.

This 96-page title describes the outnumbered German fighter force's attempt to defeat overwhelming aerial superiority from the battle of Sicily in July 1943 to the Allied advance into Northern Italy in the Winter of 1944.