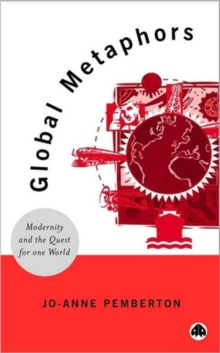 Global metaphors : modernity and the quest for one world

The advent of the 20th century saw an incredible advance in scientific technology.

By the inter-war period of the 1920s and early 1930s cars, planes and radios were a part of everyday life, and science became a popular cult for a new age.

Faith in science surged amidst an atmosphere of intellectual and social crisis.

Jo-Anne Pemberton looks in detail at the rhetoric used by the political classes of the time that propagated a vision of a new global unity, and reveals the way in which those same metaphors and imagery are used today in the rhetoric of globlization.

Then, as now, the idea of "one world" was challenged by notions of manyness and multiplicity.Drawing parallels between then and now, "Global Metaphors" reveals how much of the appeal of globlization rhetoric relies on shimmering technological fantasies about the future.

Today this also incorporates images of the environment which are used to reinforce the idea of an interconnected world.

While this seductive imagery is impelled at one level by the romance of scientific invention, Pemberton reveals the way in which it is also used to cement particular political, economic and cultural interests as universal goods.

Arguing that our current debate about globlization is in effect a re-run of the same debate from the inter-war period, she explores why globalist thinking gains currency at particular moments in history, and looks beyond this to the interests, values and cultural biases it belies.

The book explores many similarities between early 20th-century discussions of modernity and late 20th-century debates about postmodernity.