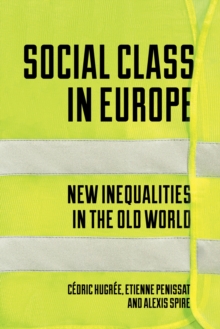 Social class in Europe : new inequalities in the Old World

Mapping the class divisions that run throughout Europe Over the last ten years - especially with the 'no' votes in the French and Dutch referendums in 2010, and the victory for Brexit in 2016 - the issue of Europe has been placed at the centre of major political conflicts.

Each of these crises has revealed profound splits in society, which are represented in terms of an opposition between those countries on the losing and those on the winning sides of globalisation.

Inequalities beyond those between nations are critically absent from the debate.

Based on major European statistical surveys, the new research in this work presents a map of social classes inspired by Pierre Bourdieu's sociology.

It reveals the common features of the working class, the intermediate class and the privileged class in Europe.

National features combine with social inequalities, through an account of the social distance between specific groups in nations in the North and in the countries of the South and East of Europe.

The book ends with a reflection on the conditions that would be required for the emergence of a Europe-wide social movement.