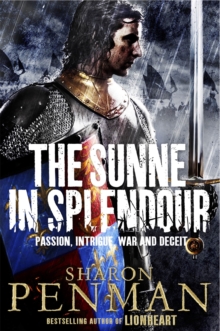 The sunne in splendour

This special thirtieth anniversary edition of the bestselling The Sunne in Splendour, features an author's note from Sharon Penman. Richard, last-born son of the Duke of York, was seven months short of his nineteenth birthday when he bloodied himself at the battles of Barnet and Tewkesbury, earning his legendary reputation as a battle commander in the Wars of the Roses, and ending the Lancastrian line of succession. But Richard was far more than a warrior schooled in combat.

He was also a devoted brother, an ardent suitor, a patron of the arts, an indulgent father, a generous friend.

Above all, he was a man of fierce loyalties, great courage and firm principles, who was ill at ease among the intrigues of Edward's court.

The very codes Richard lived by ultimately betrayed him. But he was betrayed by history too. Leaving no heir, his reputation was at the mercy of his successor, and Henry Tudor had too much at stake to risk mercy.

Thus was born the myth of King Richard III, the man who would stop at nothing to gain the throne. Filled with the sights and sounds of battle, the customs and love of daily life, the rigours and dangers of Court politics and the touching concerns of very real men and women, The Sunne in Splendour is a richly coloured tapestry of medieval England.