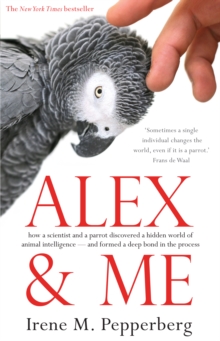 Alex & me : how a scientist and a parrot discovered a hidden world of animal intelligence, and formed a deep bond in the process

His last words to his owner, Irene Pepperberg, were 'You be good.

I love you.'Alex & Me is the remarkable true account of an extraordinary relationship between Irene and Alex - a relationship that disproved the widely accepted idea that birds possess no potential for language or anything comparable to human intelligence.

In the thirty years he spent with Irene, Alex demonstrated an incredible ability to communicate and understand complex ideas. Yet this is much more than the story of a scientific breakthrough.

Alex and Irene were emotionally connected: he missed her when she was away; he was jealous when she paid attention to others; and, nearly every day, they each said,'I love you.' Astonishing, moving, and unforgettable, Alex & Me is a powerful reminder of the bond that can exist between humans and animals.