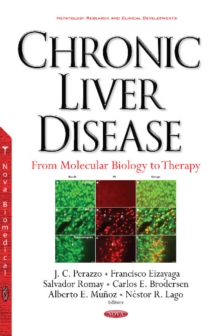 Chronic liver disease is one of the most prevalent diseases in the developed world.

The large amount of new knowledge has resulted in subspecialities, even in issues such as hepatology.

Thus every day, it is more difficult to access all relevant information that is being published.

Additionally, biomolecular techniques lead to a level of complexity that is only beneficial when dealt with by professionals.

This book attempts to give a broad overview of the molecular biology of the liver, emphasizing how this knowledge is the basis of further treatment.

Thus, pathophysiology and therapies are updated in viral hepatitis, hepatic encephalopathy and portal hypertension, among others.

However, appended issues that apparently are less relevant such as the stem cell and endocannabinoids are included.

These two issues will soon be of importance due to their close relationship with the liver tissue and especially with liver disease.

There are also new paradigms such as cell death and the implication of the extracellular matrix, which are also addressed.

In addition, important issues such as the stellate cells and their intimate relationship with fibrogenesis are treated in-depth.

The authors believe that this is a broad vision that describes the basic pathophysiological mechanisms shared by many liver diseases, giving rational support for specific therapies.