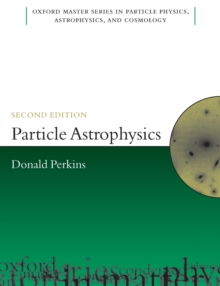 By: Perkins, D.H. (Department of Physics, University of Oxford)

Part of the Oxford Master Series in Physics series

The last years have seen a symbiosis of the fields of elementary particle physics and the astrophysics of the early universe.

This text presents the background of the subjects and the latest developments at a level suitable for final year undergraduates and beginning graduate students.

The first chapters cover the properties and interactions of elementary particles followed by discussion of the early universe, including inflation, dark matter and dark energy, and thegrowth of the galactic structure.

The final chapters discuss cosmic rays and particle physics in the stars.

The close relation between particle interactions and large scale development of the cosmos is a constant theme in the text, with emphasis on the interplay between experiment and theory.

This book is an enlarged and updated version of the first edition published five years ago.

In a rapidly evolving field, emphasis has of course been placed on the most recent developments.

However, the opportunity has also been taken to re-arrange the material and present it in more detail and at somewhat greater length.