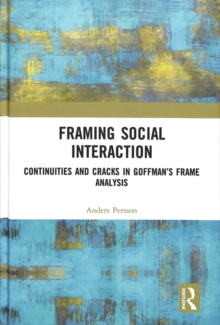 The Open Access version of this book, available at www.routledge.com/9781472482587, has been made available under a Creative Commons Attribution-NonCommercial-No Derivatives 4.0 license. This book is about Erving Goffman's frame analysis as it, on the one hand, was presented in his 1974 book Frame Analysis and, on the other, was actually conducted in a number of preceding substantial analyses of different aspects of social interaction such as face-work, impression management, fun in games, behavior in public places and stigmatization.

There was, in other words, a frame analytic continuity in Goffman's work.

In an article published after his death in 1982, Goffman also maintained that he throughout his career had been studying the same object: the interaction order.

In this book, the author states that Goffman also applied an overarching perspective on social interaction: the dynamic relation between ritualization, vulnerability and working consensus.

However, there were also cracks in Goffmans work and one is shown here with reference to the leading question in Frame Analysis - what is it that's going on here?

While framed on a "microsocial" level, that question ties in with "the interaction order" and frame analysis as a method.

If, however, it is framed on a societal level, it mirrors metareflective and metasocial manifestations of changes and unrest in the interaction order that, in some ways, herald the emphasis on contingency, uncertainty and risk in later sociology.

Through analyses of social media as a possible new interaction order - where frame disputes are frequent - and of interactional power, the applicability of Goffman's frame analysis is illustrated.

As such, this book will appeal to scholars and students of social theory, classical sociology and social interaction.