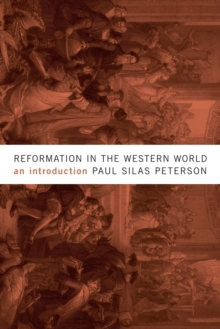 Reformation in the Western World : An Introduction

The Reformation was the single most important event of the early modern period of Western civilization.

What started out as a pastoral conflict about the sale of grace for money ultimately became a catalyst for the transformation of Western culture.

In Reformation in the Western World , Paul Silas Peterson shows how the retrieval of the ancient Christian teachings about God's grace and the authority of Scripture influenced culture, society, and the political order.

The emphasis on an egalitarian churchathe "priesthood of all believers"aled to a more egalitarian society.

In the long run, the Reformation encouraged the emergence of modern freedoms, religious tolerance, capitalism, democracy, the natural sciences, and the disenchantment of the papacy and worldly means of grace.

Yet the egalitarian fruit of the Reformation was not uniform, as is seen in the persecution of detractors and Jews, and in the marginalization of women.

In all its triumphs and innovations, evils and errors, the Reformation left a lasting double legacyaa divided church in need of unity and the possibilities of a liberated world.