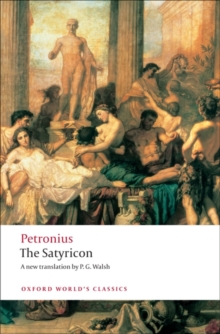 `The language is refined, the smile not grave, My honest tongue recounts how men behave.' The Satyricon is the most celebrated work of fiction to have survived from the ancient world. It can be described as the first realistic novel, the father of the picaresque genre, and recounts the sleazy progress of a pair of literature scholars as they wander through the cities of the southern Mediterranean.

En route they encounter type-figures the author wickedly satirizes - a teacher in higher education, a libidinous priest, a vulgar freedman turned millionaire, a manicpoet, a superstitious sea-captain and a femme fatale.

The novel has fascinated the literary world of Europe ever since, evoking praise for its elegant and hilarious description of the underside of Roman society, but also condemnation for some of its lewder subjects.

This new and lively translation by P.G. Walshcaptures the gaiety of the original, and the edition is supplemented by his superb Introduction giving an account of the plot, the various scholarly interpretations and the later history of its literary influcence.

There are also extensive and detailed notes which serve to illuminate the reading of a text rich in literary in-jokes and allusion.