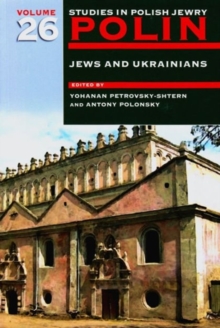 Part of the Polin: Studies in Polish Jewry series

This volume provides a comprehensive and much-needed survey of the millennium-long history of Jews in the Ukrainian lands.

The book challenges the stereotyped vision of the relationship between Jews and Ukrainians and offers in-depth studies of key periods and issues.

The survey opens with a consideration of early Jewish settlements and the local reactions to these.

The focus then moves to the period after 1569, when control of the fertile lands of Ukraine passed to the Polish nobility. Because it was largely Jews in the service of the nobility who administered these lands, they were inevitably caught up in the resentment that Polish rule provoked among the local population, and, above all, among the Cossacks and peasant-serfs.

This resentment culminated in the great revolt led by Bohdan Khmelnytsky in the mid-17th century, in consequence of which the Jews were excluded from that part of Ukraine which eventually came under Russian rule when the Polish-Lithuanian Commonwealth was partitioned.

The Jewish response to the establishment of Russian and Austrian rule in the areas of Ukraine that had formerly been in the Polish-Lithuanian Commonwealth is a second major theme of the book, and particularly the Jewish reaction to the emergence of Ukrainian nationalism and the subsequent Ukrainian struggle for independence.

A third overarching theme is the impact of the sovietization of Ukraine on Jewish-Ukrainian relations, with a chapter devoted to the 1932-33 Famine (Holodomor) in which millions perished.

The book also gives special attention to the growing rift between Jews and Ukrainians triggered by the rise of radical nationalism among Ukrainians living outside the Soviet Union and by conflicting views of Germany's genocidal plans regarding the Jews during World War II.