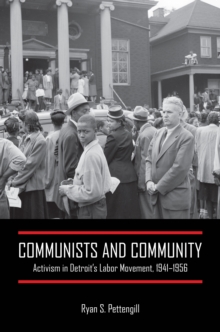 Communists and Community seeks to reframe the traditional chronology of the Communist Party in the United States as a means to better understand the change that occurred in community activism in the mid-twentieth century.

Ryan Pettengill argues that Popular Front activism continued to flourish throughout the war years and into the postwar period.

In Detroit, where there was a critical mass of heavy industry, Communist Party activists mobilized support for civil rights and affordable housing, brought attention to police brutality, sought protection for the foreign-born, and led a movement for world peace.

Communists and Community demonstrates that the Communist Party created a social space where activists became effective advocates for the socioeconomic betterment of a multiracial work force.

Pettengill uses Detroit as a case study to examine how communist activists and their sympathizers maintained a community to enhance the quality of life for the city's working class.

He investigates the long-term effects of organized labor's decision to force communists out of the unions and abandon community-based activism.

Communists and Community recounts how leftists helped workers, people of color, and other under-represented groups became part of the mainstream citizenry in America.