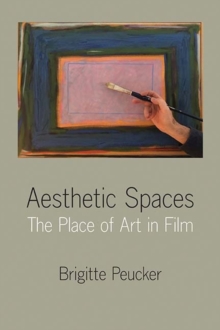 Aesthetic Spaces : The Place of Art in Film

Films provide valuable spaces for aesthetic experimentation and analysis, for cinema's openness to other media has always allowed it to expand its own.

In Aesthetic Spaces, Brigitte Peucker shows that when painterly or theatrical conventions are appropriated by the medium of film, the dissonant effects produced open it up to intermedial reflection and tell us a great deal about cinema itself.

The films studied in these chapters include those by Abbas Kiarostami, Alfred Hitchcock, Michelangelo Antonioni, Jean-Luc Godard, Carl Th.

Where two media are in evidence in these films, there is usually a third, and often theater mediates between film and painting.

Aesthetic Spaces interrogates issues of cinematic space and mise-en-scene from different but interconnected theoretical perspectives, organizing its chapters around some of the formal principles-space, spectator, frame, color and lighting, props, decor, and actor-that shape films. Drawing on the older arts to renew cinema, the films examined deploy paintings as material: Poussin and Bruegel, Rembrandt, Hals and Klimt, and medieval illustrations and modernist abstractions are used to expand our notions of cinematic space.

Peucker shows that when different media come together in film, they create effects of dissonance out of which new modes of looking may arise.