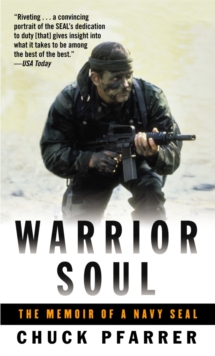 Warrior soul : the memoir of a Navy SEAL

This legacy of valor is unmatched in modern warfare.'Warrior Soul is a book about the warrior spirit, and it takes the reader all over the world.

Former Navy SEAL Chuck Pfarrer recounts some of his most dangerous assignments.

On a clandestine reconnaissance mission on the Mosquito Coast his recon team plays a deadly game of cat and mouse with a Nicaraguan patrol boat.

Cut off on the streets of Beirut, the author's SEAL detachment battles snipers on the Green Line.

In the mid-Atlantic, Pfarrer's unit attempts to retrieve- or destroy - the booster section of a Trident ballistic missile before it can be recovered by a Russian spy trawler.

On a runway in Sicily his assault element surrounds an Egyptian airliner carrying the Achille Lauro hijackers.

These are only a few of the riveting stories of combat patrol, reconnaissance missions, counter-terrorist operations, tragedies and victories in Warrior Soul that illustrate the SEAL maxim:`The person who will not be defeated cannot be defeated'.