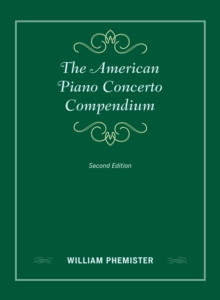 Part of the Music Finders series

Analysis expands outside mainstream concerto styles to include those considered experimental or popular derivatives.

The range of music flows from Pulitzer Prize winners like Samuel Barber, Gail Kubik, and John LaMontaine, to lesser-known multi-ethnic composers such as Tania Leon and Samuel Zyman, to old standards like Edward MacDowell and the first piano concerto written by an American-born composer, Otis B.

Boise (1875), to the cutting-edge avant-garde of Milton Babbitt and Elliott Carter, just to name a few.

These all contribute to the varied narrative that animates American piano music. With forty percent more works described, documented, and reviewed than were listed in the 1985 first edition from the College Music Society, this second edition is a valuable resource not only for pianists and conductors, but also for orchestras, teachers, students, music historians and critics, collectors, and concert attendees.