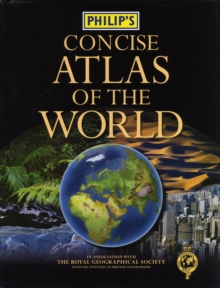 Philip's concise atlas of the world

"Philip's Concise Atlas of the World" features a handsomely illustrated introduction to world geography - 'The Earth in Space' - and with 128 pages of authoritative world maps, and a comprehensive index, this atlas is highly recommended both for home reference and as a gift.

The physical maps give a balanced coverage of the world at well-chosen scales.

Highly detailed, the cartography has been acclaimed by the "Daily Mail" as 'clearer than "The Times"'.

The hill-shading on the physical maps provides an exceptionally vivid portrayal of landforms.

The 48-page 'The Earth in Space' provides a highly accessible introduction to the key subjects in spreads.Highly illustrated with informative photographs, maps and diagrams, it explores such topics as the Universe, stars and constellations, the Solar System and Earth, earthquakes and volcanoes, oceans and deserts, climate and climate change, population, international organizations, agriculture, energy and minerals, trade and commerce, world economies, travel and communications, and the world today.

Topical maps are also provided for 'World: Regions in the News', including Iraq, Afghanistan and Israel/Palestine. The extensive alpha-numeric index of over 58,000 names includes geographical features such as mountains, rivers, lakes and deserts, as well as provinces, towns and cities.

The title has been replaced.To check if this specific edition is still available please contact Customer Care +44(0)1482 384660 or schools.services@brownsbfs.co.uk, otherwise please click 9780540092536 to take you to the new version.