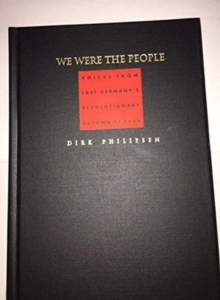 We Were the People : Voices from East Germany's Revolutionary Autumn of 1989

On the night of November 9, 1989, an electrified world watched as the Berlin Wall came down. Communism was dead, the Cold War was over, and freedom was on the rise-or so it seemed.

We Were the People tells the story behind this momentous event. In an extraordinary series of interviews, the key actors in the drama that transformed East Germany speak for themselves, describing what they did, what happened and why, and what it has meant to them.

The result is a powerful firsthand account of a rare historical moment, one that reverberates far beyond the toppled wall that once divided Germany and the world. The drama We Were the People recreates is remarkable for its richness and complexity.

Here are citizens organizing despite threats of bloody crackdowns; party functionaries desperately trying to survive as time-honored political prerogatives crumble beneath their feet; an oppressed people discovering the possibilities of power and freedom, but also the sobering strangeness of new political realities.

With their success, East Germans encountered the overpowering might of thie Western neighbor--and stand perplexed before the onslaught of real estate agents, glossy consumer ads, political professionalism--and the discovery that a lifetime of social experience has suddenly lost all usable context. They became, in the words of one participant, a people "without biography."Over all the recent events and unlikely turns recounted here, one thing remains paramount: the sweep of the initial democratic conception that animated the East German revolution.