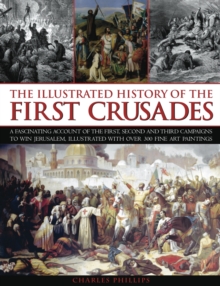 The illustrated history of the first Crusades : an expert account of the first, second and third campaigns to take Jerusalem, illustrated with over 300 fine art paintings

This is a highly visual account of the early years of the crusades, with a detailed examination of the first, second and third crusades, and the taking of Jerusalem.

This title brings to life a turbulent period of history, examining the religious fervour, motivations and ambitions of the crusading knights and their followers.

It is richly illustrated with images of the armies, leaders, battles, victories and defeats of these warriors, together with the lands they travelled across.

It also features the larger-than-life knights of the first crusades including Bohemond of Taranto, Robert of Jerusalem, Godfrey of Bouillon, Tancred Prince of Galilee and Richard the Lionheart, and examines the controversies that still surround them.

The campaign, later called the First Crusade, triumphed after gruelling marches and battles with the capture of the Holy City in July 1099. The Second Crusade (1147-49), and the third (1189-92) ended in negotiated settlements instead of the hoped-for recapture of Jerusalem, but these three crusading campaigns still hold some of the most extraordinary moments in the military, religious and political history of the period.

Historians argue over the character and legacy of the crusades, but what is certain is that they hold an enduring fascination for modern readers.

This book gives a vivid account of the journeys, battles, sieges, triumphs and failures of these campaigns and evokes the colourful spirit of the time in over 300 illustrations.