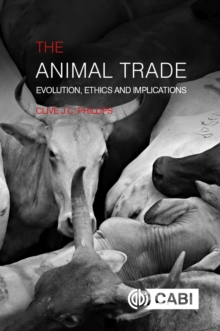 Trade is an inevitable part of human activity and evolution, but when it involves animals there are important ethical issues that have to be considered.

Animal trade is often for economic reasons only, and may be hard to justify ethically.

There are significant welfare and environmental costs to animals and human society that must be carefully evaluated before such a trade is sanctioned.

Controversial and thought-provoking, this text focuses on the trade in live and dead animals and animal parts.

It examines the facts and figures to quantify the scope of the animal trade, concentrating mainly on farm animals, but also covering captive wildlife and companion animals.

The book describes welfare, environmental, economic and cultural issues around this trade, debating important ethical considerations for everyone that uses or is otherwise involved with animals, especially people in animal welfare.