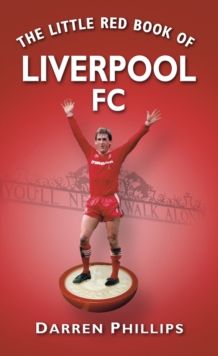 The Little Book of Liverpool FC - a book on the Reds like no other, packed with facts, stats, trivia, stories and legends.

Liverpool, the most prolific trophy-winning club in the history of domestic and European football, has a rich and varied history.

Players such as Elisha Scott, Billy Liddell, Kenny Dalglish, Ian Rush and Steven Gerrard are synonymous with the club's success and their achievements, along with all those who have worn the red shirt, are envied throughout the world. This book charts the club's history in an intriguing format which will appeal to all fans, young or old, so why not take a look back at what has made this club what it is today - the players and characters that have represented Liverpool over the years and the events that have shaped the club. If you want to know the record crowd for a home game, the record appearance holder or longest-serving manager, look no further - this is the book you've been waiting for.

All the well known events are covered, as are many priceless trivia gems - who can claim to know that a former world heavyweight champion boxer was once on the club's books and that one trophy win may be down to a Romany curse on the opposition?

Can you really afford not to own a copy?