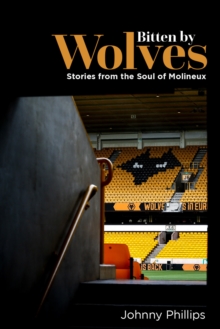 Bitten by wolves : stories from the soul of Molineux

Bitten by Wolves takes us on a glorious yet tumultuous journey through the modern history of Wolverhampton Wanderers.

From lifting league titles and pioneering European club competition to twice going bankrupt and languishing in the Fourth Division, Wolves have experienced extreme highs and lows.

The author spent a year speaking to former players, staff, supporters and others who witnessed or played a part in some of the most successful, turbulent and defining moments in the club's recent history.

Wolves have always been about much more than the results on the pitch.

It's the club's place in the Wolverhampton community that underpins its identity.

Today, Wolves are going through existential change under the ownership of a Chinese investment conglomerate.

The author has gained behind-the-scenes insight into the current ownership and management while revealing how Wolves became the club it is today.

Filled with fascinating untold stories and eye-witness accounts, Bitten by Wolves tells the definitive story of the club's evolution.