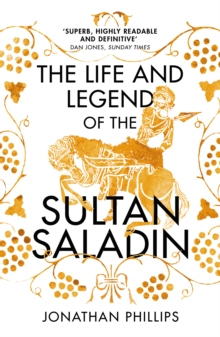 The life and legend of the Sultan Saladin

One of the outstanding books of the year' The TimesAn epic story of empire-building and bloody conflict, this ground-breaking biography of one of history's most venerated military and religious heroes opens a window on the Islamic and Christian worlds' complex relationship. WINNER OF THE SLIGHTLY FOXED BEST FIRST BIOGRAPHY PRIZEWhen Saladin recaptured Jerusalem from the Crusaders in 1187, returning the Holy City to Islamic rule, he sent shockwaves throughout Christian Europe and the Muslim Near East that reverberate today. It was the culmination of a supremely exciting life.

Born into a significant Kurdish family in northern Iraq, this warrior and diplomat fought under the banner of jihad, but at the same time worked tirelessly to build an empire that stretched from North Africa to Western Iraq.

Gathering together a turbulent coalition, he was able to capture Jerusalem, only to trigger the Third Crusade and face his greatest adversary, King Richard the Lionheart. Drawing on a rich blend of Arabic and European sources, this is a comprehensive account of both the man and the legend to which he gave birth, describing vividly the relentless action of his life and tracing its aftermath through culture and politics all the way to the present day. 'An authoritative and brilliantly told account of the life of one of the world's greatest - and most famous - military leaders' Peter Frankopan