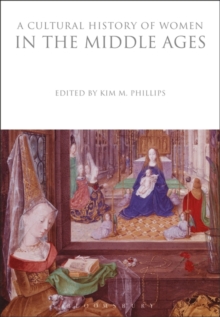 A cultural history of women in the Middle Ages

By: Phillips, Kim M. (University of Auckland, New Zealand)(Edited by)

Part of the The Cultural Histories Series series

The medieval era has been described as 'the Age of Chivalry' and 'the Age of Faith' but also as 'the Dark Ages'.

Medieval women have often been viewed as subject to a punishing misogyny which limited their legal rights and economic activities, but some scholars have claimed they enjoyed a 'rough and ready equality' with men.

The contrasting figures of Eve and the Virgin Mary loom over historians' interpretations of the period 1000-1500.

Yet a wealth of recent historiography goes behind these conventional motifs, showing how medieval women's lives were shaped by status, age, life-stage, geography and religion as well as by gender. A Cultural History of Women in the Middle Ages presents essays on medieval women's life cycle, bodies and sexuality, religion and popular beliefs, medicine and disease, public and private realms, education and work, power, and artistic representation to illustrate the diversity of medieval women's lives and constructions of femininity.