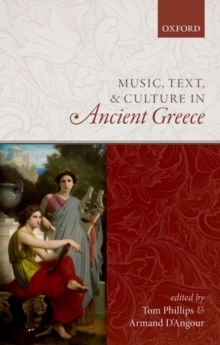 What difference does music make to performance poetry, and how did the ancients themselves understand this relationship?

Although scholars have long recognized the importance of music to ancient performance culture, little has been written on the specific effects that musical accompaniment, and features such as rhythmical structure and melody, would have created in individual poems.

This volume attempts to answer these questions by exploring more fully the relationship between music and language in the poetry of ancient Greece.

Arranged into two parts, the essays in the first half engage closely with the evidential and interpretative challenges posed by the interaction of ancient music and poetry, and propose original readings of a range of texts by authors such as Homer, Pindar, and Euripides, as well as later poets such as Seikilos and Mesomedes.

While they emphasizedifferent formal features, they also argue collectively for a two-way relationship between music and language: attention to the musical features of poetic texts, insofar as we can reconstruct them, enables us to better understand not only their effects on audiences, but also the various ways in whichthey project and structure meaning.

In the second part, the focus shifts to ancient attempts to conceptualize interactions between words and music; the essays in this section analyse the contested place that music occupied in the works of Plato, Aristotle, Plutarch, and other critical writers of the Hellenistic and Imperial periods.

Thinking about music is shown to influence other domains of intellectual life, such as literary criticism, and to be vitally informed by ethical concerns.

These essays illustrate the importance ofmusic for intellectual culture in ancient Greece and the ancients' abiding concern to understand and control its effects on human behaviour.