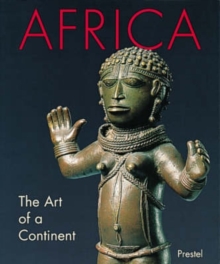 Africa : The Art of a Continent

This volume provides a global vision of the art of Africa through a host of colourful images of the finest known objects from the continent's cultural heritage.

It examines African art geographically in a "grand tour" that divides the continent into seven areas.

Beginning with ancient Egypt and Nubia, it moves down the eastern coast through Ethiopia and the Sudan - including the island of Madagascar - to Southern Africa, then up through the Congo and Central Africa to the Guinea Coast and the countries of the Sahara.

Finally, it moves to North Africa, before returning to Egypt in its later Christian and Islamic periods.

Within each of these seven chapters, objects are illustrated in chronological order, demonstrating the extraordinary range of styles inspired by different religions and cultures realized in a variety of materials from dung to gold.

The artifacts comprise ornaments and jewellery, textiles, snuff bottles, Tutsi basketry from Rwanda, and sculpture, including the finest bronzes, terracottas and wood carvings from all periods. The book details the archaeological, historical and cultural background of every illustrated object and relates individual pieces to the people who made them.

From ancient Egypt comes the Battleground Palette from 5000 B.C.

This ceremonial palette depicts a battle on one side and an elegantly carved scene of grazing animals on the other.

The book pictures a lyre from the southern Sudan that is over three feet high and profusely decorated with coins, beads, and shells.

If the scope of the book spans a whole continent, the source of the objects is transcontinental.

Works of art from the finest public and private collections in Europe, America and the rest of the world are juxtaposed with the best from Africa itself.

This book is published to coincide with "Africa 95", the first nationwide celebration of the arts of Africa ever to be held in Great Britain.

Patrons of "Africa 95" are Her Majesty The Queen, President Nelson Mandela, and President Leopold Sedar Senghor. As the birthplace of the human race, Africa has a cultural history of unparalleled length; the book reflects this vast time span and the diversity of the art of the continent.