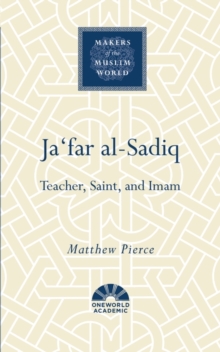 Part of the Makers of the Muslim World series

Few stand closer to the nexus of all major Islamic sects than Ja'far al-Sadiq (702-765).

Not only is he revered by Twelver Shi'a Muslims, who regard him as the sixth infallible imam in the line of succession from the Prophet Muhammad, but he is cited as an authoritative figure in Sunni chains of hadith transmission, and is prominent in Sufi lineages of authority.

He has also been heralded as a disseminator of occult sciences among esoteric groups, and in today's Iran a vibrant trade in herbal remedies has developed around his explorations of natural medicine. Matthew Pierce examines the life and legacy of this important figure who shunned numerous opportunities to claim political power as the Umayyad Empire fell and the 'Abbasids rose, instead dedicating himself to teaching and learning.

By studying al-Sadiq, in whom Sunni, Shi'a, and Sufi religious lineages and authorities converge, Pierce engages with early debates within Islam, from a time before sectarian lines were solidified.

The first book-length biography of Ja'far al-Sadiq in the English language, this volume is a vital contribution to the literature.