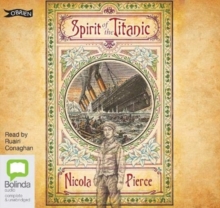 Spirit of the Titanic

By: Pierce, Nicola,  Conaghan, Ruairi(Read by)

That calm, sunny day is one I'll always remember ... because the twentieth of April, in the year 1910, was the day I, Samuel Joseph Scott, died.'Fifteen-year-old Sam plunges to his death whilst building his beloved Titanic.

Now as the greatest ship the world has ever seen crosses the Atlantic Ocean, Sam finds himself on board â€“ as a ghost.

His spirit roams the ship, from the glamour of first class to the party atmosphere of third class.

Sam shares the excitement of Jim, Isobel and their children - on their way to a new life in America.

Disaster strikes when Titanic hits an iceberg. As Titanic sinks to her icy grave, Jim and his family are trapped behind locked gates ...