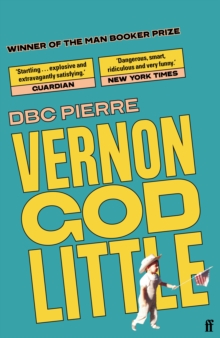 Vernon God Little: a 21st century comedy in the presence of death

Faber and Faber
0571246087 / 9780571246083
eBook (EPUB)
823.92
04/09/2008
Available
England
English
General
202 pages
Copy: 10%; print: 10%
Description based on print version record.
Named as one of the 100 Best Things in the World byGQmagazine, the riotous adventures of Vernon Gregory Little in small-town Texas and beachfront Mexico mark one of the most spectacular, irreverent and bizarre debuts of the 21st century so far. Its depiction of innocence and simple humanity (all seasoned with a dash of dysfunctional profanity) in an evil world is never less than astonishing. The only novel to be set in the barbecue sauce capital of Central Texas,Vernon God Littlesuggests that desperate times throw up the most unlikely of heroes.'A showpiece of superb comic writing . . . Out of the detritus of a morally bankrupt society, Pierre has fashioned a work of comic art.'Sunday Telegraph'In a just world, this ridiculously funny first novel would come free with every television set . . . Not since reading John Kennedy O'Toole's masterpiece,A Confederacy of Dunces. . . have I laughed so much or felt such sheer delight at the discovery of a wholly fresh comic voice . . . this novel reads like a modern day fairytale.'Mail on Sunday