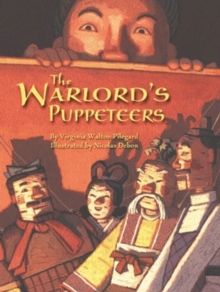 Clever young Chuan and his artist mentor are back in this fourth book of the Warlord Series.

This time, the two are journeying across the desert to find their master, the warlord, when they meet up with a group of travelling puppeteers.

When bandits attack and steal their trunk of puppets, Chuan knows that he must step into help his new friends in order to finish the journey.

Using a melon and his imagination, Chuan tries to make a new puppet so the performers can earn their money to finish their trip through the desert.

Despite his good intentions, Chuan discovers that he has a lot to learn about their craft, and e takes a few lessons in proportions.

With Chuan's resourcefulness and the puppeteers' help, the troupe is able to create all new puppets and put on the show that will save the day.

Children learn about creativity and compassion in a lesson in mathematics that is fun at it is fascinating.

Directions for making their own puppet follow the story.