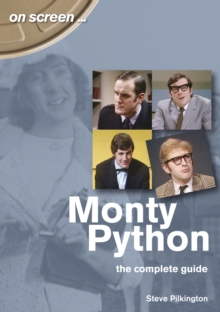 Part of the On Screen series

Everyone has their favourite Monty Python sketches, often quoted almost verbatim, whether it is 'the Parrot Sketch', 'the Cheese Shop' or 'Blackmail' - amongst many.

Likewise the Python films, the mere mention of which might solicit quotes like 'Tis but a flesh wound' or 'He's not the Messiah, he's a very naughty boy'.

But what lies beyond these well-remembered favourites?

How many remember the 'Fresh Fruit Self Defence' sketch, or 'the Fish-Slapping dance'? Or even such almost-forgotten curios as 'Blancmanges Playing Tennis', 'The Olympic Hide And Seek Final' and 'The Batley Townswomen's Guild Re-enacting Pearl Harbour'.

This book will shine a light on all of these often-hilarious - but occasionally misfiring - curios. As well as the films and all 45 TV episodes, the record albums are also analyses for their content and how they differed from the TV show, as well as the books which came out as spin-off merchandise - but were never less than brilliantly entertaining for all that.

How did Python come to be, what tensions were there between its stars, and what was the atmosphere like when the crew reunited to make the films long after they had left their TV show days behind them?

All this will get an answer and much, much more... Now, do you want to read for five minutes, or the full half-hour?