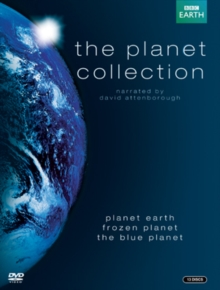 In 'Planet Earth' (2006) every episode but the first looks at one of the Earth's natural habitats and examines its local features, together with the breadth of fauna found there.

The series took five years to make and contains footage of animals and places never before caught on camera.

The episodes comprise: 'From Pole to Pole', 'Mountains', 'Fresh Water', 'Caves', 'Deserts', 'Ice Worlds', 'Great Plains', 'Jungles', 'Shallow Seas', 'Seasonal Forests' and 'Ocean Deep'. 'Frozen Planet' (2011) explores the polar extremes, capturing life in the Arctic and Antarctic and taking a look at how climate change is affecting the landscapes of these fascinating regions.

The episodes comprise: 'To the Ends of the Earth', 'Spring', 'Summer', 'Autumn', 'Winter', 'The Last Frontier' and 'On Thin Ice'. 'The Blue Planet' (2001) examines life beneath the world's oceans, demonstrating the amazing variety and complexity of the underwater kingdom.

The series looks at a range of marine animals from the most dangerous predators to some of the tiniest life forms.