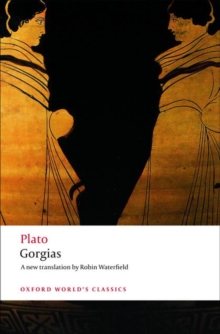 By: Plato,  Waterfield, Robin(Edited and translated by)

The struggle which Plato has Socrates recommend to his interlocutors in Gorgias - and to his readers - is the struggle to overcome the temptations of worldly success and to concentrate on genuine morality. Ostensibly an enquiry into the value of rhetoric, the dialogue soon becomes an investigation into the value of these two contrasting ways of life.

In a series of dazzling and bold arguments, Plato attempts to establish that only morality can bring aperson true happiness, and to demolish alternative viewpoints. It is not suprising that Gorgias is one of Plato's most widely read dialogues. Philosophers read it for its coverage of central moral issues; others enjoy its vividness, clarity and occasional bitter humour. This new translation is accompanied by explanatory notes and an informative introduction.