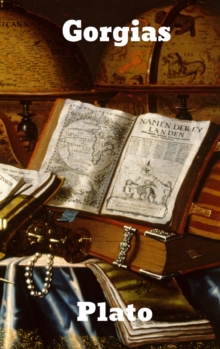 Gorgias is a Socratic dialogue written by Plato around 380 BC. The dialogue depicts a conversation between Socrates and a small group of sophists (and other guests) at a dinner gathering. Socrates debates with the sophist seeking the true definition of rhetoric, attempting to pinpoint the essence of rhetoric and unveil the flaws of the sophistic oratory popular in Athens at the time. The art of persuasion was widely considered necessary for political and legal advantage in classical Athens, and rhetoricians promoted themselves as teachers of this fundamental skill. Some, like Gorgias, were foreigners attracted to Athens because of its reputation for intellectual and cultural sophistication. Socrates suggests that he is one of the few Athenians to practice true politics (521d)

The dialogue begins just after Gorgias has given a speech. Callicles says that Gorgias is a guest in his home, and has agreed to a private audience with Socrates and his friend Chaerephon. Socrates gets Gorgias to agree to his cross-examination style of conversation. Gorgias identifies his craft as rhetoric, and affirms that he should be called a rhetorician. As Socrates asks him questions, he praises him for the brevity of his replies. Gorgias remarks that no one has asked him a new question in a long time, and when Socrates asks, he assures him that he is just as capable of brevity as of long-windedness (449c).

Gorgias admits under Socrates' cross-examination that while rhetoricians give people the power of words, they are not instructors of morality. Gorgias does not deny that his students might use their skills for immoral purposes (such as persuading the assembly to make an unwise decision, or to let a guilty man go free), but he says the teacher cannot be held responsible for this. He makes an argument from analogy: Gorgias says that if a man who went to wrestling school took to thrashing his parents or friends, you would not send his drill instructor into exile (456d–457c). He says that just as the trainer teaches his craft (techne) in good faith, and hopes that his student will use his physical powers wisely, the rhetorician has the same trust, that his students will not abuse their power.

Socrates says that he is one of those people who is actually happy to be refuted if he is wrong. He says that he would rather be refuted than to refute someone else because it is better to be delivered from harm oneself than to deliver someone else from harm. Gorgias, whose profession is persuasion, readily agrees that he is also this sort of man, who would rather be refuted than refute another. Gorgias has only one misgiving: he fears that the present company may have something better to do than listen to two men try to outdo each other in being wrong (458b–c). The company protests and proclaims that they are anxious to witness this new version of intellectual combat.