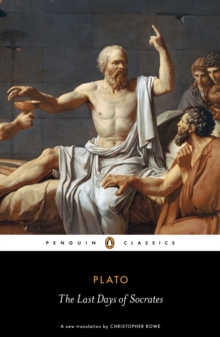 By: Plato,  Tarrant, Harold(Introduction by)

Plato's account of Socrates' trial and death (399 BC) is a significant moment in Classical literature and the life of Classical Athens. In these four dialogues, Plato develops the Socratic belief in responsibility for one's self and shows Socrates living and dying under his philosophy. In Euthyphro, Socrates debates goodness outside the courthouse; Apology sees him in court, rebutting all charges of impiety; in Crito, he refuses an entreaty to escape from prison; and in Phaedo, Socrates faces his impending death with calmness and skilful discussion of immortality. Christopher Rowe's introduction to his powerful new translation examines the book's themes of identity and confrontation, and explores how its content is less historical fact than a promotion of Plato's Socratic philosophy.

For more than seventy years, Penguin has been the leading publisher of classic literature in the English-speaking world. With more than 1,700 titles, Penguin Classics represents a global bookshelf of the best works throughout history and across genres and disciplines. Readers trust the series to provide authoritative texts enhanced by introductions and notes by distinguished scholars and contemporary authors, as well as up-to-date translations by award-winning translators.