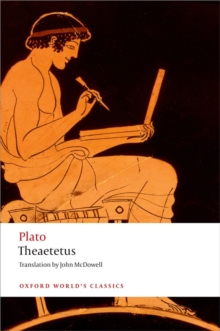 'What exactly is knowledge?'The Theaetetus is a seminal text in the philosophy of knowledge, and is acknowledged as one of Plato's finest works. Cast as a conversation between Socrates and a clever but modest student, Theaetetus, it explores one of the key issues in philosophy: what is knowledge? Though no definite answer is reached, the discussion is penetrating and wide-ranging, covering the claims of perception to be knowledge, the theory that all is in motion, and the perennially tempting idea thatknowledge and truth are relative to different individuals or states. The inquirers go on to explore the connection between knowledge and true judgement, and the famous threefold definition of knowledge as justified true belief. Packed with subtle arguments, the dialogue is also a work of literary genius, with anunforgettable portrait of Socrates as a midwife of wisdom.

This new edition uses the acclaimed translation by John McDowell.

It includes a valuable introduction that locates the work in Plato's oeuvre, and explains some of the competing interpretations of its overall meaning.

The notes elucidate Plato's arguments and draw connections within the work and with other philosophical discussions. ABOUT THE SERIES: For over 100 years Oxford World's Classics has made available the widest range of literature from around the globe.