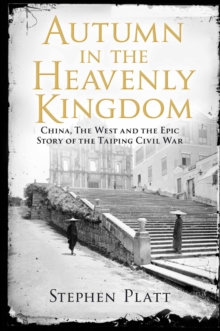 Autumn in the heavenly kingdom : China, the West, and the epic story of the Taiping Civil War

In the early 1850s, during the twilight of the Qing dynasty, word spread of a major revolution brewing in the provinces.

The leader of this movement - who called themselves the Taiping - was Hong Xiuquan, a failed civil servant who claimed to be the son of God and the brother of Jesus Christ.

As the revolt grew and battles raged across the empire, all signs pointed to a Taiping victory and to the inauguration of a modern, industrialized and pro-Western China. Soon, however, Britain and the United States threw their support behind the Qing, rapidly quashing the Taiping and rendering futile years of bloodshed.

In Autumn in the Heavenly Kingdom, Stephen Platt recounts the events of the rebellion and its brutal suppression in spellbinding detail.

It is an essential and enthralling history of the rise and fall of a movement that, a century and a half ago, might have launched China into the modern world.