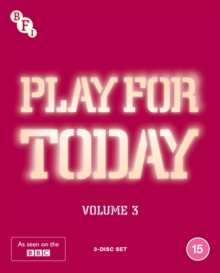 Another collection of plays from the BBC's anthology series.

In 'Edna, the Inebriate Woman' (1971) Edna (Patricia Hayes) has neither a home, a job nor any money.

She wanders from one hostel to the next, sometimes living under a bridge, sometimes undergoing treatment in a psychiatric ward, always adamant that she is not a vagrant. 'Just Another Saturday' (1975) is set in Glasgow during the Orange Walk parade.

John McNeil (John Morrison) is a young man gradually coming to terms with the violent and unpleasant truth behind the marching and symbolic pageantry. 'Bar Mitzvah Boy' (1976) follows the fears and trepidations of a young Jewish boy as he approaches his Bar Mitzvah.

Eliot Green (Jeremy Steyn) is reluctant to depart from the comforts of childhood, while to other members of the family the event is of great importance.

Eliot's mother, Rita (Maria Charles), views the ceremony as an opportunity to celebrate her family; Grandfather Wax (Cyril Shaps) enjoys the traditional nature of the event; but his father, Victor (Bernard Spear), struggles to look beyond the mounting bill.

In 'The Mayor's Charity' (1977) Olive Major (Thora Hird) is determined that her year as Mayor will be happy and successful, but she causes a stir when she appoints Ex-Warrant Officer Higham (Frank Windsor) as her mace bearer.

In 'Coming Out' (1979) romantic novelist Lewis (Anton Rodgers) is a gay man afraid to come out and alienate his mostly female fans.

When he writes an article on gay issues under a pseudonym, its success leads him to come out.