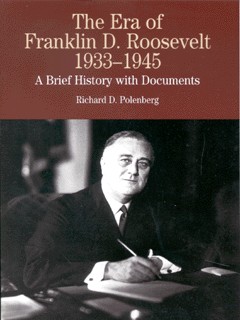 Part of the The Bedford series in history and culture series

The era of Franklin D. Roosevelt and the New Deal was a time of depression and despair, economic rebirth and renewal, and mobilization for a war spanning two oceans.

Richard Polenberg's introduction to this new volume provides a historical and biographical overview of the period.

This is followed by over 45 topically arranged primary sources that provide students with a rich context in which to understand Rossevelt's multi-faceted role as President, reformer, policymaker, and Commander in Chief.

The readings cover issues of race and ethnicity, profile First Lady Eleanor Roosevelt, and explore the New Deal's transformative agencies not only for their economic and social ramifications, but also for the constitutional revolution they triggered.

Illustrations include photographs by Dorothea Lange and patriotic war posters.