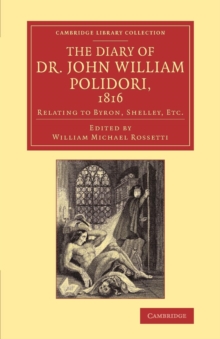 John William Polidori (1795-1821) was, for a brief period, the personal physician to Lord Byron.

Half Italian, he was the uncle of the Rossetti siblings, and it was William Michael Rossetti, in his role as family recorder, who published Polidori's manuscript diary after nearly a century, in 1911.

This account of his time with Byron (which ended two months later when they quarrelled and parted company) is the only contemporary account of the few weeks, crucial to the development of the Romantic movement, during which Mary Shelley's Frankenstein arose from a storytelling competition at the Villa Diodati.

Polidori's later career as a physician and writer was hampered by a severe accident in 1817 which left him with brain damage.

His most famous work, The Vampyre, was published in 1819, but attributed to Byron, leading both men to threaten the publisher with lawsuits.