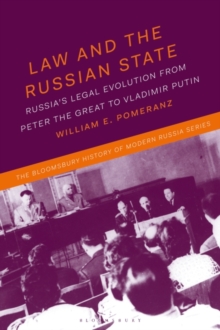 Law and the Russian state : Russia's legal evolution from Peter the Great to Vladimir Putin

Part of the The Bloomsbury History of Modern Russia Series series

Russia is often portrayed as a regressive even lawless country, and yet the Russian state has played a major role in shaping and experimenting with law as an instrument of power.

In Law and the Russian State, Pomeranz and Smith examine Russia's legal evolution from Peter the Great to Vladimir Putin, addressing the continuities and disruptions of Russian law during the imperial, Soviet, and post-Soviet periods.

There will be comprehensive coverage of key themes, including law and empire, law and modernization, the politicization of law, the role of intellectuals and dissidents in mobilizing the law, the evolution of Russian legal institutions, the struggle for human rights and the rule-of-law, and the quest to establish the law-based state.

The book will also analyze legal culture and how Russians understand and use the law. This book, which includes a detailed bibliography, is an important text for anyone seeking a sophisticated understanding of how Russian society and the Russian state have developed in the last 350 years.