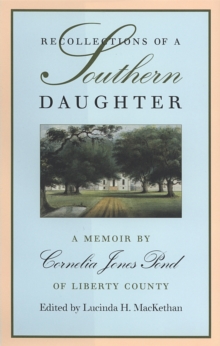 Recollections of a southern daughter : a memoir by Cornelia James Pond of Liberty County

Recollections of a Southern Daughter recalls life in antebellum Liberty County, Georgia, a time and place best known today through the letters of the Charles Colcock Jones family, published in the classic Children of Pride, and the letters and journals of the Roswell King, Fanny Kemble, and Joseph LeConte families.

In this memoir Cornelia Jones Pond gives an eyewitness account of how the privileged life of the southern slaveholding class was destroyed by a whirlwind of change.

Pond's narrative begins in 1834, when she was born to one of the Old South's wealthiest plantation families.

It ends in 1875, when she was a forty-one-year-old minister's wife and the mother of four daughters, trying to make her way in the drastically changed post-Civil War South.

She began dictating her memoir to her daughter Anne in 1899, when she was sixty-five years old, and the handwritten manuscript eventually found its way to the Midway Church Museum.

This is the first unabridged edition of Pond's memoir, and it includes notes, genealogy, and an extensive intoduction by Lucinda H.

MacKethan. In Recollections of a Southern Daughter Pond renders with striking immediacy and affectionate detail not only her personal past but also the tremendous upheaveals of history that she witnessed firsthand.

Many of the experiences recorded here parallel those depicted in Children of Pride, thus extending our knowledge of the people of this region, their values, their everyday concerns, and the national drama that engulfed their families in the years of civil war.